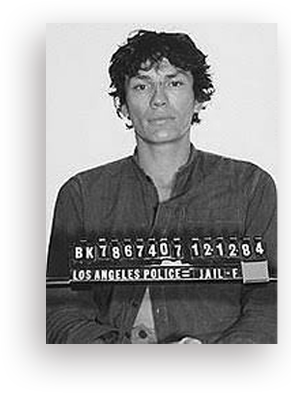 Dubbed “The Night Stalker,” Richard Ramirez wrote 269 letters to Richie Dickstein. From the opening letter, Ramirez blatantly reveals himself as a sadistic sexual deviant. He writes, in great detail, about his unquenchable passion for dominating women through bondage and torture. He also frequently writes about the feet, leg, and shoe fetishes he has, as well as his fascination for Asian women.

At the end of every letter, he asks Dickstein to continue sending him fetish, bondage, and hardcore sex magazines, books, and photos. He was extremely manipulative using passive-aggressive tactics to get what he wanted. These letters are a reservoir of chilling and significant information, revealing Ramirez to have been highly motivated to rape and torture behind his insatiable sexual appetite.

This is adverse behavior of sexual serial murderers because most pattern rapists, who evolve into murderers, are driven by the need to control through fear and terror, and in many attacks sexual gratification is never achieved.

The letters also indicate that Ramirez was very cognizant of other serial murderers and their methods of torture and killing. He was proud of his “accomplishments” and often wondered where he sat amongst some of the most prolific serial killers of all time. In many letters he asks if other serial murderers are active, specifically in Richie’s neighborhood. He also wants to know, in great detail, how they were killing, and what, if any, their “signatures, or tells” were.

Another topic he was extremely keyed into was pop culture and his place within it. A huge fan of movies, he proudly gushed after seeing an image of himself in Oliver Stone’s 1995 film, “Natural Born Killers.” In another letter he excitedly writes about the actor, Sean Penn. For thirty days they were housed just a few cells from each other inside the SHU – “Special Housing Unit” – of a Los Angeles County correctional facility. He excitedly writes about his conversations with Penn as well as meeting the actor’s girlfriend at the time, Madonna.

In one letter Ramirez explains that he is not afraid to die, ending the note with this final line: “Hey, we all gotta go sometime, they don’t call this place Death Row for nothing, your fiendish pal, Richard. ”  It’s also apparent from his writings he had no remorse for his murders, and that the police only got him on just a few of the many more he’d committed during his year-and-a-half long killing spree.

LISTEN TO THIS EPISODE