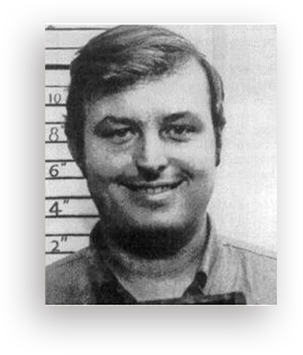 GERARD SCHAEFER
Convicted of only two murders, Schaefer, a one-time Deputy Sheriff of Martin County, Florida is believed to have committed upwards of sixty murders in Florida. His crimes were so depraved and barbaric the FBI’s Behavioral Science Unit commented: “Schaefer was the most extreme and heinous of all modern serial killers in the United States.” Schaefer’s letters, artwork, and twisted anecdotal poems included in this collection verify that chilling FBI statement. He was was captured after committing the horrific murder/torture of two 15 and 16-year-old teenagers. During a cursory search of his mother’s Florida home, the police found over seventy pieces of evidence – ‘trophies’ taken from other suspected murders – all of which were connected to missing Florida women. However, the prosecutors were stymied, without a body they could not file a single case against him.

Schaefer’s letters are filled with graphic sexual content and extreme violence. He confesses to many other murders and writes of having mailed photos of his victims – postmortem – to their family homes while gleefully confessing, with lurid detail, to some of these murder/rapes. He relished in bringing back all of the horrible grief and terrorizing the victims’ families. “I’m out here, and I am always watching you, remember that.”  In one letter he boldly writes of a rape and murder he committed against a young mother and her daughter, bragging about his sexual stamina and cruel imagination, making both victims watch while he violated and tortured the other for hours, and only then, after becoming “bored”, did he kill them.

Schaefer sought out other serial murderers while in prison, becoming, as he describes in one letter, “best friends,” with Ted Bundy. To prove this he sent a sample of Bundy’s hair and a paint chip from the wall of his death row cell to Barbara Dickstein.

Schaefer was a prolific artist; most of his artwork depicts violent acts of savagery committed against young naked women. He was also a writer, becoming a published author of short stories while imprisoned. The book is now out of print, however, the collection has a copy along with dozens of his lurid, and at times, threatening letters and artwork.

LISTEN TO THIS EPISODE